Director's Cut (2014) is Joe Lee's fifth installment of the critically acclaimed Oakdale suspense series. It is his seventh novel.

"Joe Lee is a great speaker," said Eleanor. "He made me want to read all of the suspense series he's written! He really drew me in!"

There are always great programs going on at the Pearl Public Library. Don't forget the bag of books for $1 book sale going on right now. All the books you can fit into a bag. The proceeds go to benefit the Friends of the Pearl Library.

We'll see you there!
Posted by Pearl Library at 9:51 AM No comments:

CHAPTER 1 BOOK CLUB FILLS UP ON A GREAT READ IN PEARL! 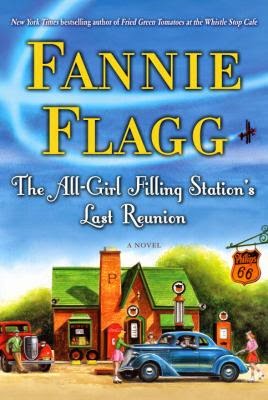 Author Fannie Flagg, of Fried Green Tomatoes at the Whistle Stop Cafe, Can't Wait to Get to Heaven and I Still Dream About You fame, has done it again.

Flagg's latest book, The All-Girl Filling Station's Last Reunion, is a hoot, and Cecelia's pick for the Chapter 1 Book Club meeting Thurs. Nov. 13 at 6 p.m. at the Pearl Public Library.

Sookie Poole of Point Clear, Alabama has just embarked upon an empty nest, and is set to enjoy life with her husband Earle. She has just married off the last of her daughters and is looking to relax and perhaps even travel. But, then there's her mother to deal with; Lenore Simmons Krackenberry. Even at 88, Ms. Lenore is beautiful and loads of fun to everyone, except Sookie who pretty much thinks her mother is overbearing.

As it is with life's crazy twists and turns, Sookie finds out that Ms Lenore is not even her biological mother. That's a great thing to be hit with when you are Sookie's age, or what she thought was her age. Sookie finds out she's a year older!  She doesn't get the opportunity to gracefully segue into 60 from 59. Nope, she's slammed right into the big 6-0!

Sookie's real mother is Fritzi Willinka Jurdabralinski of Pulaski, Wisconsin, oldest child of Polish parents! Fritzi's father owns a service station but falls ill. Her brother goes off to war. That leaves Fritzi and her sisters to run the service station. With all girls running the shop, it became quite popular.  Fritzi later joins a flying circus. Then she enters the volunteer Women's Airforce Service Pilots (WASP) of World War II.

Naturally, all this news leaves poor Sookie in identity crisis mode!  For 59 years she was a full blown all-southern girl. Now, Sookie learns that she has deep Polish roots.  You just know the book is a fun read!

So, read the book and stop by to discuss Sookie's crazy life journey! No reservation needed and you don't have to be a member to participate. And, as always, there will be light refreshments and door prizes.

We'll see you there!
Posted by Pearl Library at 2:15 PM No comments:

A BAG OF BOOKS FOR A BUCK AT THE PEARL LIBRARY! 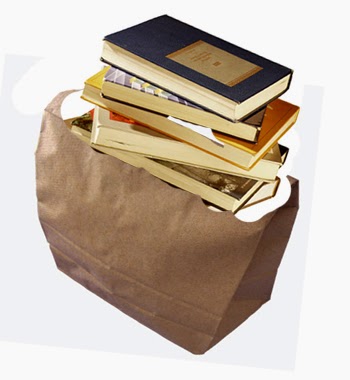 A bag of books for a buck! Say that five times really fast.  Juuuuuuust kidding!

But, this is no joke.  For one dollar, you can buy a whole bag of book sale goodies at the Pearl Public Library!  This sweet, bagalicious , all-you-can-fit-into-one-bag, $1 book buffet will last as long as there are books for sale said Sara, the circulation supervisor. "That should be for at least two weeks." WOW!

Don't miss out on this opportunity to bag you some real great deals. Remember, they make wonderful gifts too!  And, since all proceeds go to benefit the Friends of the Pearl Library, it can be your way of donating to a wonderful cause!!! You simply cannot beat that!

So, come on by the Pearl Library. The book sale items are near the circulation desk!

We'll see you there!
Posted by Pearl Library at 1:39 PM No comments: 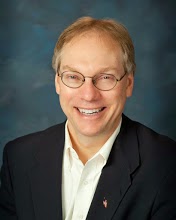 He will be discussing his latest work, Director’s Cut, (2014) the fifth of the critically acclaimed Oakdale suspense series. It is his seventh novel. A book signing will follow.
Lee, owner and Editor-in-Chief of Dogwood Press in Brandon, has appeared at the library before, and is an audience favorite.  “We’re happy to have Joe Lee back at the Pearl Library,” said Eleanor Jones who's in charge of adult programming at the library.  “He’s such a great asset to the community and to Mississippi. We can’t wait to hear about Director’s Cut.”

In Director’s Cut, Tripp Kelly is a laid back film professor at the University in Oakdale. He has everything. He’s popular among the student and faculty body. He’s newly and happily married to a former student named Dana. He loves his work which includes spearheading an annual, well attended independent film festival. He’s just a happy guy, and couldn’t be happier. He’s also a serial killer!

THAT got your attention didn't it!?  See, you do not want to miss this Brown Bag special. No reservations needed. The program is free; desserts and drinks are supplied by the Friends of the Pearl Library!

We'll see you there!
Posted by Pearl Library at 8:58 AM No comments: