December Events at the Morton Library

We are going to have a lot of exciting things going on in December!

First off we will be having a contest to see who can Disguise the best Gingerbread Man! Come by the library and pick up your Gingerbread Man and take it home and decorate it to look like something other than a Gingerbread Man. Bring it back to the Library by December 20th and We will pick the best disguise to win a prize.

Next, we will be having a special Letters to Santa! Come in the Library and make out your Christmas list and we will have a magical Santa mailbox where you can put your letter in and it will be sent to Santa as soon as you put it in the mailbox!

We will also have a Santa's Naughty and Nice list up for you to add your name to for Santa to see. You better be nice or Santa will know!

We hope you have a great and safe Christmas Holiday! Spend time with your family and read some Christmas stories. We have lots of Christmas books for you to choose from so come see us and get some books to read together as a family and make this Christmas one to remember!

Merry Christmas from the Morton Library!

Posted by Morton Library at 4:01 PM No comments:

Nothing Trivial About It: The Answer Is… by Alex Trebek

Tragically, Alex Trebek, the long-time host of the syndicated game show Jeopardy!, passed away earlier this month on November 8, at the age of 80, after struggling with pancreatic cancer. As a fixture on the show for 36 years, Trebek became a steadfast daily presence in the lives of millions of Americans. He became a symbol of intellectual achievement and commitment to curiosity and learning.

Behind the symbolism, though, lay an ordinary human with a story to tell. Before his death, Trebek released his autobiography, The Answer Is…:Reflections on My Life, this July. Alex Trebek was born as the son of a Ukranian immigrant hotel cook in a mining town in northern Ontario. Trebek does not pay short shrift to his origins, nor is he condescending in his tone. He understands most people are probably reading the book for insight into the world of Jeopardy!, but I think this choice is revealing of a very humble attitude in his perspective on his success. 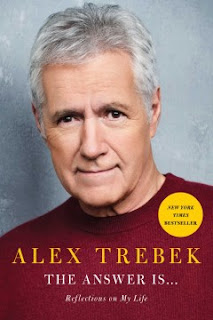 Trebek does get to Jeopardy! and tells you about iconic champions Ken Jennings and James Holzhauer, but also tells you about his favorite contestants of lesser renown as well. Both in the book and on the show, he could vacillate between gravitas and silliness, becoming whatever the situation called for. He mentions several times that he is the host, not the star, of Jeopardy! The show itself is the star, and we are the players.

Written well into his cancer struggle, The Answer Is… can be pensive, but it is never morose. It is far closer to being joyful and full of life. While a look into the life of Alex Trebek (written by the man himself) may surprise its readers, we should all be so lucky to take stock of our lives as the final curtain closes.

Hello, CMRLS patrons! We know it has been a crazy year, and with things slowing down due to COVID, our staff has had more reading time on our hands. We would like to share with you what we've been reading lately. If you have read any of the following or want to recommend new picks, please let us know in the comments!

First up, we have Where the Crawdads Sing by Delia Owens.

Wow!  I highly recommend this read! At first, I thought the title was overhyped because it was part of Reese’s book club, but then curiosity eventually got the best of me. Therefore, I had to see what the fuss was all about. I am so glad I did! The characters are unforgettable, and the plot and storyline are brilliant. I literally could not put this book down because it drew me in. It is such a bittersweet, unforgettable story that makes you cheer for Kya, the heroine, in all her trials. This is a must-read!

Kya has been living on her own since she was abandoned by her family as a small child. Living in an old shack outside of a charming North Carolina beach town, Kya only leaves her house to boat to the local gas station for groceries, as well as study local coastal wildlife. As a result, she has been given the nickname “Marsh Girl” by most of the town, many disapproving of her wild living and failure to blend in with society and its ways. One day, a young man, from a respected family in town, is discovered dead in the marsh.  No one, not even the sheriff, can figure out how he died.  Was it simply a tragic accident, or was there foul play?

Midnight Sun by Stephanie Meyer is Edward’s perspective from the Twilight series. It is interesting to see a different point of view from such a popular series. It is much different than Bella’s point of view which was how the original series was written. It helps us understand Edward and his actions better. I noticed a few things were different from how the original was written, but it was still very interesting and a great read. I would recommend to any Twilight fan!

In Blood Heir, there are two types of people: humans and affinites. Affinites are people with special gifts; however, they are often abused and sold into slavery. The main character is Anastacya Mikhailo (Ana). She is the Crown Princess and a Blood Affinite. After being framed for murdering her father, Ana flees for her life. She spends a year growing stronger and hunting the man that really killed her father. She also learns of a darker conspiracy that could annihilate her entire kingdom.

I recommend this book, and I am waiting for the sequel, Red Tigress, to come out on March 2, 2021.

Morgan Hedglin, Pearl branch manager, recommends Darling Rose Gold and writes:
Don’t let the pretty cover fool you, this book is creepy and sinister. Based on the true story of Gypsy Rose Blanchard, a victim of Münchausen syndrome by proxy (MSBP) who eventually murdered her abusive mother with her online boyfriend, Stephanie Wrobel reimagines what may have happened if the titular Rose Gold sent her mother to prison instead of killing her.The events of the book go back and forth between present-day and 5 years earlier when the mother Patty was sent to prison. Rose Gold has agreed to let Patty have a second chance and live with her upon release, but does she or Patty have revenge in mind?Excellent read for fans of The Act on Hulu or Sharp Objects by Gillian Flynn.
Have you read any of these books? What did you think? Do you have any book recommendations for us?
Until next time,
Happy reading!
-MLH

Posted by PearlLibrary at 2:54 PM No comments: