Everyone Saves Money at the Library! 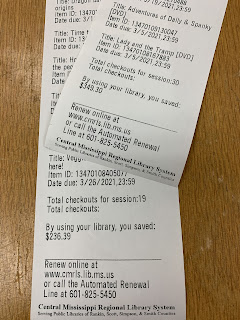 If you haven't paid a visit to your local library lately, then you probably paid too much. Because libraries are such great savings places, the Forest Public Library is celebrating National Library Week and Money Smart Week with a special checkout incentive during the month of April. Every time patrons borrow materials from the library, they receive a printed receipt with the due date and renewal information, website and telephone contact, and at the very bottom of the receipt - right underneath the total number of checkouts for the session - the dollar amount saved by using your library. The information is displayed on the receipt in the same way that membership cardholders save money at local retail stores, drug store chains, club member companies, and online shopping venues.

The savings to the library user is often significant. Patrons check out a variety of items at the library, including DVDs, books, audiobooks, CDs, fitness equipment, and even cake pans! These items can be expensive to purchase, especially if only used one time. Libraries often compare to bookstores with the most recent bestsellers and just-released DVDs of the newest movies and television series. To buy, rent and/or stream these items can cost hundreds of dollars per year. The library staff had the idea to total how much money local patrons save during a one-month period.

The promotion also has an additional money incentive - a $100 VISA card! Each time patrons check out items, they will receive an entry for the drawing. The entry will include the patron's card number and the amount saved on the receipt. The drawing will be held on Friday, April 30, at 5:30 p.m., and the winner will be notified on Monday, May 3rd. The $100 VISA card is provided by the Friends of the Forest Public Library.

National Library Week (April 4-10, 2021) is a time to celebrate our nation's libraries, library workers, contributions, and promote library use and support. First sponsored in 1958, National Library Week is sponsored by the American Library Association and all types of libraries across the country participate. During the pandemic, libraries have learned to adapt resources and services to meet patrons' needs. The theme for National Library Week 2021 is "Welcome to YOUR Library." The Forest Public Library staff welcomes patrons to visit the library in person, use our continued curbside service or see what is available online with our free virtual programs, online databases, and library apps.

The American Library Association is also a supporter organization for Money Smart Week, which is held April 10-17, 2021. Money Smart Week is a national public education program coordinated by a network of supporters that provides people of all ages the knowledge and skills to make better informed financial decisions focusing on the key financial pillars of saving, spending, borrowing, and planning.

Combining the two important weeks with a month-long promotion is the best way to celebrate both events. Welcome to your library, save money, and enter a drawing to win a $100 VISA card! Everyone saves money at the library -- how much will you save?

Posted by Dianne McLaurin at 4:17 PM No comments:

April at the Morton Library 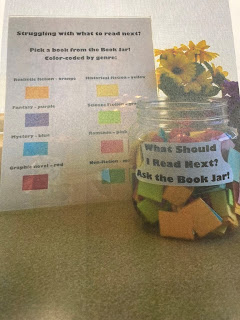 If you need to try and find something new to read, stop by the library and pick a book from the jar to try.  They are color-coded by genre of the book or just grab one for something totally different.  We will also be having National Library Week so we will be having a lot of great activities online for all ages.  We will also have take-home crafts to pick up in the library for all ages and even a family craft for the whole family to make together. Come check out a family movie and make some snacks and spend quality time together as a family!

We would like to thank all of our Friends of the Morton  Library for all that they do for us all year long and would like to invite others to become a Friend of the Library and receive special library benefits and help to make our library the best it can be! We need your help to do this! Memberships can be picked up at the library. The enrolment fee for joining is Students $1, individuals $5, family $10, and a business $25 per year. This is a great way to help out your local library!

We are slowly trying to update the inside of the library to make it more enjoyable for you so come by and see the progress!

Posted by Morton Library at 2:00 PM No comments:

One Author, Three Books, and Fourteen Days in Ireland

Of all the holidays celebrated throughout the year, St. Patrick's Day is always a favorite! Whether a simple pinch for not wearing green, rollicking shenanigans at a local pub, or the festivities of a St. Patrick's Day parade, March 17th is the date that we set aside to pay tribute to everything Irish. However, if you happen to be one of the millions who read Nora Roberts novels, embracing Irish culture could possibly become a life-changing experience.
Nora Roberts is the author of more than 220 novels, publishing at least five per year with no ghostwriters. Her books are perennial New York Times bestsellers numbering more than 500 million worldwide. Forbes magazine estimates her net worth at $390 million as of January 30, 2020. Over the last 30 years, an average of 27 Nora Roberts books sold every minute. According to her website, if you placed all the Nora books top to bottom, they would stretch across the United States from New York to Los Angeles 18 times! Recently The New York Times called her "America's favorite author."
During my tenure as a youth services librarian, I had not known much about Nora Roberts (who also writes as J.D. Robb); however, I worked with a branch manager who waited with bated breath for each new novel. I can remember her sneaking in a page or two of the latest release with every spare moment. That same branch manager gifted me with a Nora Roberts trilogy during a period of at-home recovery. Those three books - The Gallaghers of Ardmore - began a reading journey that changed my life. Nora Roberts introduced me to the Emerald Isle with her enchanting stories, and years later, I spent fourteen days discovering its allure for myself.
Ardmore is a charming coastal village in County Waterford and the setting for two of her best-selling Irish trilogies. According to The Irish Times, American tourists flock to Ardmore every year. Most of them stay at the Cliff House Hotel - a five-star hotel, which is literally built into the side of a cliff and offers seaside views from the terrace or balcony of each room. However, if they are Nora fans, they have come to drink from St. Declan's Well, hike the Cliff Walk, and pay their respects to the local pub An Tobar, which was owned by the now-deceased Kevin Gallagher. The pub was renamed "Gallagher's" for the trilogy of books entitled Jewels of the Sun, Tears of the Moon, and Heart of the Sea - all of which can be checked out at CMRLS libraries.
The next stop on the Nora Roberts Ireland tour is the picturesque town of Cong located in County Mayo which offers parallels to the Cousins O'Dwyer Trilogy. According to her personal blog, Roberts' visit to Ashford Castle was an inspiration for the series. In August of 2014, she appeared at an event at the castle to promote the release of the trilogy - Dark Witch, Shadow Spell, and Blood Magick. Each of the three main characters has an animal guide, which includes a horse, a falcon, and a wolfhound. For Nora followers, the castle visit must include the guided trail rides, a morning walk with the two resident wolfhounds, and a hawk walk at the Ireland School of Falconry. The evening meal must take place at Cullen's at the Cottage, where Iona (the main character from the first book) has dinner her first night at the castle. The castle grounds, the thick patches of forest, the small shops, and the winding path that comes out in the village are exactly as Roberts describes them in the books.
The Nora journey through Ireland continues to County Clare, the home of the Concannon Sisters of the Born In Trilogy. In a special note introducing the series, she describes the pull of Ireland - the wild cliffs, the green hills, and the enduring beauty. "I love the feel of Ireland, the warmth and humor of the people, the light, the look, the music. When I was able to make the trip with my family, I knew I was home the moment I landed at Shannon Airport."
After receiving too many rejections to count, Roberts' first published novel in 1981 was a Silhouette romance entitled Irish Thoroughbred - the first of the Irish Hearts Trilogy. According to Nielsen, she is now ranked as the third bestselling author in the 21st century, bested only by James Patterson and J.K. Rowling. For her devoted following, she delivers the true storytelling experience. And for those readers who have just a wee bit of the luck of the Irish, Nora's novels promise the trip of a lifetime.
Posted by Dianne McLaurin at 2:00 PM No comments: