January Events for The Morton Library 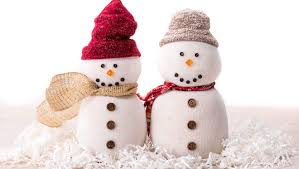 Just because Christmas is over doesn't mean all of the excitement is gone.
At the Morton Library, we are still reading, making crafts, and having contests!
We have fun crafts to be picked up for our take-home crafts this month.
We are also having another fun contest! This one will show all of your creative talents!
It's making a snowman! The only rules are that it can't contain anything that will go bad or melt and it needs to be no taller than 24 inches high. Other than that let your imaginations run wild and see who can create the best snowman. So let the contest begin and may the best snowman win! Bring your snowman to the library no later than Jan 17th . The winner will be picked that afternoon. A small prize will be given.
We have a great event for adults online this month. It is an interview with  Author Randy Pierce.
It will be a zoom talk on January 21 at 3:00 p.m. He is the author of the book Missy. Please join in
and hear all about him.
Don't forget to return any books that you may still have at home from prior to covid, we are relieving
fines right now so please return any books you may have and we will take care of the fine for you.

Posted by Morton Library at 2:01 PM No comments:

Christmas Trees Throughout the Years

In 1824, a German composer and teacher named Ernst Anschutz paid homage to the fir tree when he penned the modern lyrics to "O Tannebaum." The original folk song was written in the 16th century by Melchior Franck and was rewritten again in 1819 as a tragic love song by August Zarnack. However, it was not until the custom of the Christmas tree developed in the 19th century, that Anshutz's version morphed into the beloved English Christmas carol. The song tells the story of the faithful fir tree with its evergreen branches that bear the joyful message of the Christmas story. According to the various lyric changes, the tree gives us pleasure and delight, fills our hearts with music, and brings us light in winter's gloom.

The Forest Public Library agrees that nothing brightens the holidays like the first sight of Christmas trees. As part of the Forest Area Chamber of Commerce's Stationary Christmas Parade, the library staff created a display of 12 Christmas trees throughout the years, beginning with the Pioneer tree. 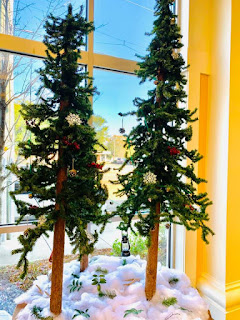 Laura Ingalls Wilder wrote of Christmas celebrations during the pioneer days; however, it is doubtful that she had a Christmas tree in her "little house." Most pioneer homes were too small to make room for a tree, or wood was too scarce to "waste" on a tree. Christmas gatherings happened by the fireplace or around the traditional meal. Children might be fortunate to find a new penny in a knitted stocking, but most children delighted in a homemade gift, such as a carved wooden toy or a cornhusk doll. If a pioneer home was large enough for a tree, the decorations included pinecones, yarn or straw figures, bits of ribbon, and flour ornaments. 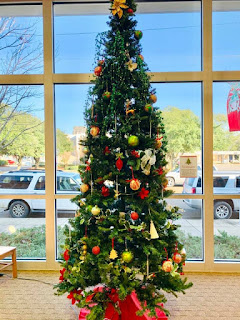 The Victorians took quite a different attitude toward the Christmas tree. In the 1870s, store-bought ornaments were introduced and quickly replaced homemade decorations. Paper designs of Christmas ornaments were printed in ladies' magazines and glass Christmas tree ornaments made their first appearance on American trees. Victorian trees were trimmed with gilded angels, stars, walnuts, and crosses - the more gold, the better. Candles were also used to illuminate the tree. One traditional token remained. The Christmas cracker was made with colored tissue paper and a sweet verse (and sweet treats) inside. These popping tubes were called "Kisses," and were later mass-produced by Tom Smith and Company, who manufactured nearly eleven million in a single season. 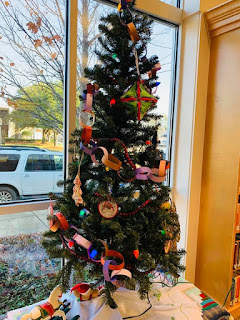 From feast to famine was the tale of the depression-era Christmas tree. Gone were the great excesses, replaced with meager and frugal trinkets...with one exception. The tree at Rockefeller Center was erected on Christmas Eve in 1931 by construction workers. The tree was a 20-foot balsam fir decorated with strings of cranberries, garlands of paper, and tin cans. That year, America was in the middle of a deep depression with unemployment near 60% in the construction industry. The laborers received holiday checks and bonuses, and for them, the Christmas tree was a sign of hope and better days ahead. The official tree lighting at Rockefeller Center started in 1933 with a 40-foot tree illuminated with 700 lights and continues to this present day. 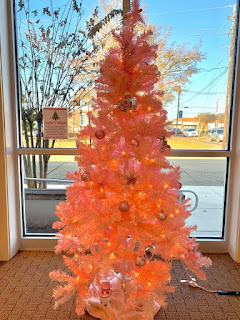 In the twenty years that followed, Americans witnessed an era of great prosperity. During post-war consumer craziness, many Americans were buying and building new (and modern) houses, and they did not want old-fashioned fir trees. Concept trees featured in glamour magazines were artificially produced in factories, usually in one color - pink or blue - with the same color ornaments. These trees were a favorite of Peanuts' character Lucy as she strolled through the commercial tree lots. 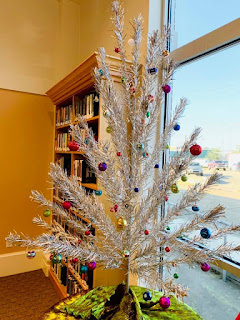 In the 1960s, the Christmas tree became even more commercial with the appearance of the silver aluminum tree. From 1958 until the mid-'60s, the tree could be purchased in the Sears catalog, along with a rotating wheel of four primary colors. Many families substituted the traditional evergreen tree for the shiny new tree with its Shiny Glass Brite ornaments. Little did these companies know that one television special would send their trees and rotating wheels packing to attics and basements throughout the country. 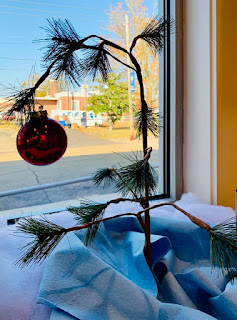 In the 1965 Peanuts' special, A Charlie Brown Christmas, the main character buys a scrawny, live fir tree to protest the over-commercialization of Christmas. After his friends make fun of his selection, Charlie Brown takes the fir tree home to decorate it. He places one red ornament on the tree, and it bends under the weight. Charlie Brown thinks he has killed the tree. Later, his friends come along and redecorate the tree with an eclectic mix of ornaments - teaching them (and the viewer) the real meaning of Christmas. 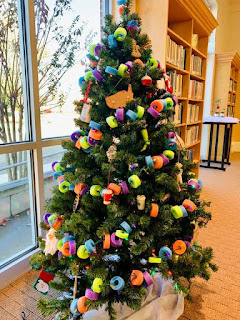 After the Charlie Brown special, Americans begin to see the Christmas tree as something to love and cherish. Ornaments became more personal in the 1970s, and trees returned to their natural green color. In 1973, a company called Hallmark produced its first Keepsake ornament. Since that year, over 400 ornaments have been issued. These Keepsake ornaments are carefully stored each year with other family heirlooms to be used again during the next Christmas season. Each year, the unpacking of the ornaments creates familial connections that serve as part of the tree decorating rituals, which also include holiday music, hot cocoa, and happy memories. 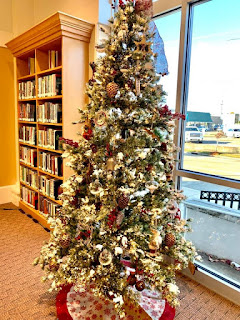 The most common theme for artificial Christmas trees from the beginning of the 1970s until the present day is a more natural appearance. Evergreens of all shapes and sizes have been produced to satisfy the discriminant customer. The science of flocking used by natural tree farms to create the resemblance of snow was soon copied in the artificial market. Flocked trees are especially popular in Southern climates where snow is scarce. 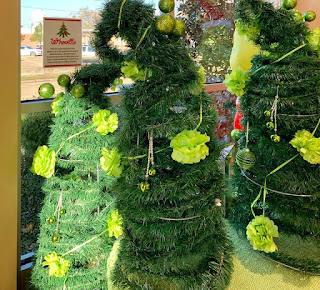 Whoville trees made their first appearance in the Dr. Seuss book How the Grinch Stole Christmas. The best-known decoration in Who-lore is the iconic curved conifer tree - a whimsical style used in American displays to the present day. The magic of the Whoville tree is found in its association with a favorite childhood story that celebrates not only the joy and wonder of a season but the difficulties and challenges as well. 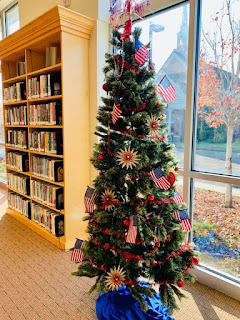 At the turn of the millennium, the idea of a themed Christmas tree was still in vogue. As part of the Y2K celebration, patriotic trees were trimmed with flags and stars; red, white, and blue ornaments; and the year 2000 memorabilia and keepsake ornaments. Despite the warning that the world would end on January 1st, Americans continued to deck out their fashionable Christmas trees to coincide with the historic celebration. 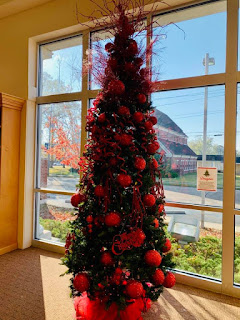 Approaching the present day and in keeping with fashion, the designer tree is a must-have for families of influence. Gucci, Dior, Chanel, and many of the biggest names in fashion began designing unique Christmas trees to benefit charities in the late 1990s. After the millennium, department stores seized the opportunity to market these trees to the consummate shopper. A color scheme, oversized ornaments, and a large topper are the secrets to a designer tree -- sometimes accompanied by an interior designer who decorates the tree in the client's home. 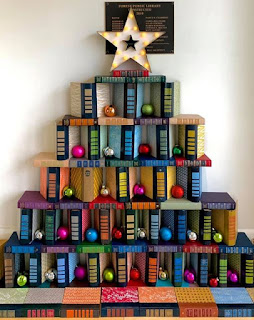 December Events At The Morton LIbrary 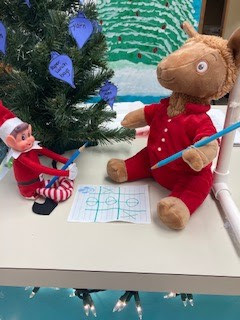 We have a lot of fun events at the Library this month!

We have a Gingerbread contest where you come into the library and pick up a paper gingerbread man and make it look like something other than a gingerbread man. They need to be turned in before Dec 20th for judging and the best one will win a small prize!

We also have a new take-home craft each week to be picked up.

The week of Dec 14th come by the library to pick up your little Christmas treat.

We have a ton of Christmas movies and books for you to watch this Holiday Season so come by and see what all we have available or you can go online and reserve your copies to be placed on hold for you.

The Elf on the Shelf will be up to fun and mischief from now until Christmas so come by the Library each day and see what he is up to and to fill out your letters to Santa! We have a magic mailbox that sends your letters directly to Santa!

We look forward to seeing all of you and we hope you stay well and have a very Happy Holiday!

Posted by Morton Library at 9:18 AM No comments: