Patrons of CMRLS Libraries can now access their favorite digital magazines using Flipster from EBSCO Information Services. Flipster is a next-generation magazine service that allows people to browse digital versions of the latest issues of popular magazines, courtesy of the library.

There are more than 30 titles in the collection; including People, Entertainment Weekly, Time, Southern Living, Country Living, Real Simple, Good Housekeeping, Cooking Light, Family Tree, Flex, Car and Driver, Essence, Ebony, and many more. Personal subscriptions would cost hundreds of dollars, but now everyone in the 4-county area has access to these titles. View the magazines on any online device; or download to Android™ phones and tablets, Apple® phones and tables, and Kindle Fire tablets for offline reading anytime, anywhere. The Libraries also offer free Wifi.

Flipster offers an easy, browse-able reading experience. Users can browse magazines by category as well as perform searches for specific periodicals. An online newsstand provides a carousel of the most recent issues, as well as a carousel of all issues allowing for quick access to magazines. The table of contents contains links for quick access to articles of interest and hotlinks within magazines are hyperlinked, opening in separate tabs when clicked. In addition, there is an option to zoom in and out for better readability.

“This is one more Library service that makes information available 24 hours a day, 365 days a year. Log in to Flipster and other Library services with your Library card barcode number and your Library comes to you,” said Dorothy Vance, CMRLS Public Relations Coordinator. “We have downloadable eBooks, audiobooks, music, and now magazines. Numerous databases can be accessed from anywhere; these are credible, peer reviewed books and journals; just what is needed for homework or personal research.”

Contact your Library staff at any of the CMRLS Libraries; or visit online at cmrls.lib.ms.us to learn more about accessing the library’s digital magazines through Flipster.

Posted by lib-blogger at 1:39 PM No comments:

FOR IMMEDIATE RELEASE
FLOWOOD READS HITS THE GROUND RUNNING
But community help is still needed to make it a success.

The Flowood Library's program, Flowood READS, has started. Consisting of 3 contests and four interactive programs, the library has developed a "City Wide Book Experience" that focuses on more than traditional literacy.

"Flowood READS is a project that is modeled after the American Library Association's One Book, One Community program - it was designed to fold literacy into community engagement. I personally see it as a way to connect with those who aren't big readers; I see it as a way to showcase how the library is a community center rather than a repository for old books." Ashley Biggs, Branch Manager said.

The library launched Flowood READS earlier this year with a host of Facebook contests - all of which had cash prizes awarded for the winners. Then on September 1st, the library launched the first of three in-person contests that encouraged artists to submit their own movie or book poster that would then be displayed for the public to vote on.

The second contest, Peculiar Art, however, has already begun to gain speed. "We started out with 25 packs of "found" pieces that artists need to incorporate into their own artwork. That started on October 1st. By October 5th, we had given away 15 of the packs to those who wanted to submit their work for public vote." Biggs said.  "We're really looking forward to displaying the creative pieces."

Also this month, the library is hosting a Peculiar Photos program where attendees will be shown how to manipulate their own photographs to be similar to the odd photos found in both the book and movie. Those wanting to participate visit the library by October 26th, have their picture taken in front of the library's green screen, and then return to the library on October 29th to edit the photos using the library's mobile computer lab.

"We've already had a lot of fun with this," Biggs said. "My staff and I have already started playing with the software and have come up with some weird photos! The way it will work is that we snap your picture using the library's camera and then on October 29th, you come back and we'll show you how to insert yourself into a 'peculiar' background, how to give yourself some form of a supernatural ability, and after it's all over, we'll upload them to Facebook for everyone to see."

But that's not all. They have also planned a magic program around Mississippi's own Dorian LaChance, a short story contest and awards program, and finally a mini carnival, complete with a book talk.

"The second book in the series takes place, at least in part, during a carnival. We thought having a carnival like program would be a great way to segue from one book to the other." Biggs said."We had hoped to have the funds to really make the capstone event, the carnival, pop, but that hasn't happened. We're relying heavily on donations - both in kind and financial." To her great delight, a few local companies have stepped in to assist in making the program happen. "We've been blessed with help from Cups of Flowood, the Flowood Chamber, Dorian LaChance, the Flowood Compass, and the Friends of the Library."

But there's still a lot more work to do, Biggs emphasized. "We're just a few short weeks away, and as excited as we are, and as important as this program is, we simply cannot make it happen without the support of the community."

"We want this to become an annual program, much like summer reading. We have already started a vote for next year's theme," Biggs said. "It's between James Bond, Sherlock Holmes, and The Martian. So far, Sherlock is winning." The vote is on the Flowood READS Facebook page, and will be republished in November.

All events that the library hosts are FREE and open to the public, and the programs associated with Flowood READS are no exception.

For more information about the program, the library encourages you to visit the website: www.flowoodreads.com and their Facebook page, www.facebook.com/flowoodreads.

If you are interested in helping with or volunteering at any of the library's events, you're encouraged to email the Branch Manager: fwbm@cmrls.lib.ms.us.

Posted by Flowood Library at 3:39 PM No comments:

All Day Affair! Get Your Free Screening!

Don't worry about your deductible or any doctor's office visit costs!  Not this time! The Pearl Public Library is hosting an all-day, free health fair, Friday, Oct. 21 from 9:30 p.m. to 4:30 p.m., featuring members of the Holmes Community College Nursing Program. Qualified nursing students will be accompanied by their instructor and registered nurse, Madeline Brewer.  There will be free blood pressure screenings, free handouts, full of great health information and free answers to your questions!  You simply cannot beat that! 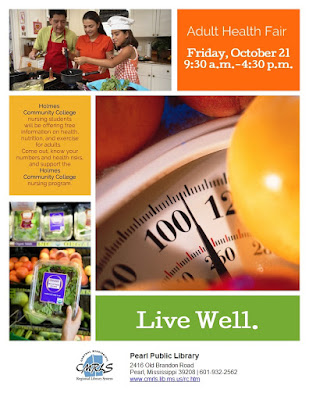 OK, so that's one healthy dose of  October adult program, but it's not the only one. No way!  Amy Lee, the adult program coordinator, has your October fully covered. That's right!  Can't forget about Halloween now can we?!?!?!?!?

Check this trick out. During Simply Crafts on Thursday, Oct. 20, at 6 p.m., participants will turn ordinary mason jars..... POOOOF!!!! into beautifully, decorative, nifty holding vessels.
It's a free program, no reservations needed. All materials are supplied! 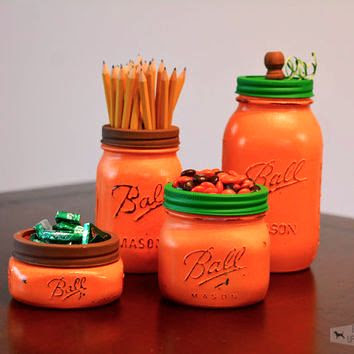 Now how about the treat!  Not missing a beat, Amy has a Halloween tea on tap!  Wha Whaaaaaaaaaaattt!   Halloween and a tea?!?!? What an OXYMORON, right?!?  Maybe so, but this is gonna be one sweet tea you want to partake in! Yes, the time is right, from 2 p.m to 4 p.m. on Friday, Oct. 28 and there will be tea...bwwwhahahahwwwhahhh !!!!  There will also be free cookies and donuts! So, get an early start! Come in costume if you'd like and treat yourself to Halloween yummies right here at the Pearl Public Library! 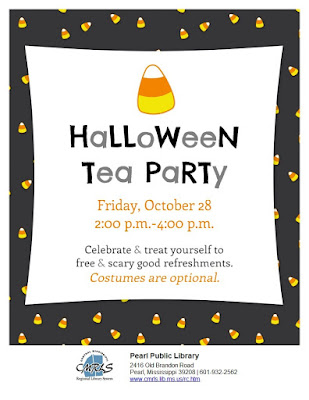 Remember all adult programs are free. Don't miss out!

We'll see you there!
Posted by Pearl Library at 9:39 AM No comments: