These Boots Are Made For...TOURING!!!

The Pearl Public Library’s Chapter 1 Book Club presents author and Pearl native, Kathy Zebert, Thursday, October 6 at 6 p.m.; the first stop of her Red Boot Tour. Zebert will talk about her writing and do a book signing
Zebert, now a resident of Chattanooga, TN, just published the third installment of her popular Callie and Dom series, Hand In Hand which came out on September 15. She’ll talk about all three books which include Incredulity (September 2015) and Madame Court Reporter (April 2016). 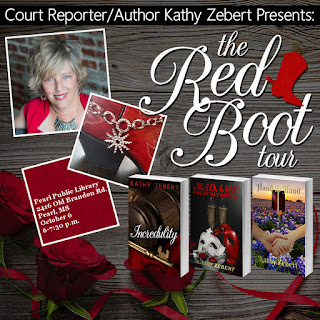 Zebert, also a jewelry maker and baker, will be giving away, in a drawing, a piece of original boot jewelry. Complimentary specialty chocolates will be given to all attendees.
After the Pearl Library stop, Zebert will stop in Natchitoches, LA, Washington, DC, and Atlanta, GA for other business in conjunction with the Red Boot Tour.
The program is free. No reservations required. All are welcome to attend. Light refreshments will be provided.

Don't miss out on this wonderful evening!!!

We'll see you there!
Posted by Pearl Library at 3:30 PM No comments: 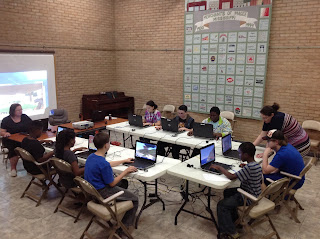 The library was eerily silent this week after school because the teens were in the meeting room playing Minecraft.  We had fun building our shelters and gathering resources to survive the zombie apocalypse.  If you enjoyed the peace and quiet, do not be dismayed by the farewell of the Minecraft kit.  You will have another three weeks in November to enjoy a quiet library when Minecraft returns to Magee.

The book club book this month is What Alice Forgot by Liane Moriarty.  We will meet on Tuesday, October 11th at 12:30 p.m. to discuss our thoughts on the book.

Do you have what it takes to decorate a pumpkin?  The only rule we have is that you may not carve it.  So, get out the paint, glitter, ribbon, glue, and shiny things.  Let the creativity flow, and bring your pumpkin to Magee Public Library by October 21st.  Maybe your pumpkin will win a prize!
Posted by Magee Public Library at 11:06 AM No comments:

Also on Saturday, October 1, we will have fun with Race Day. We will be racing something all day long! The schedule is as follows:

We support Red Friday during the regular football season.
This program is sponsored by the Friends of the Brandon Library
Every week there will be a drawing for a $10 coupon to a Brandon eatery. To enter, wear RED when you come to the library on Friday and check out one item. There is a new sign-up and prize every week.
At the end of the season, we will put all the entries back in the big bowl and draw for the grand prize - an iPad Mini.
There will also be additional prizes given away at that time - three Library Buck Awards of $10 each. Library Bucks can be used for fines or for Book Sale items. Library Bucks can not be used for debt collect charges.
We will see you Friday!

Friends Meeting
If you are interested in joining the Friends of the Brandon Library, their next monthly meeting is October 18 at 6 pm. Everyone is welcome.

Posted by Brandon Library at 10:46 AM No comments: 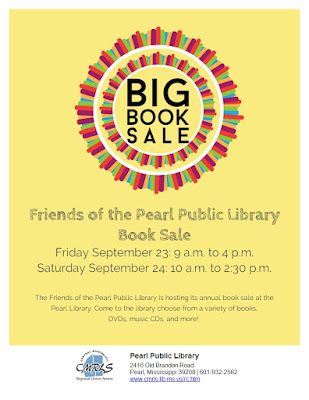 It’s a bargain hunter’s dream and happens every year at the Pearl Public Library! The Friends of the Pearl Library’s big, annual book sale is Friday, Sept. 23 from 9 a.m. to 4 p.m. and Saturday, Sept. 24 from 10 a.m. to 2:30 p.m.  All proceeds benefit the Friends’ group, which support the library through volunteering, purchasing books and equipment and sponsoring programs for all ages.
Among the many gems of this year’s book sale are Big Band Era and wartime music CDs, wartime DVDs and tons of cookbooks.
Book sale prices range from .25 cents to $5.00. Near the end of the book sale on Saturday, all the leftover items will be on a special, bag-for-a-buck, bargain.  It’s everything you can fit into a grocery bag for $1.
This year, to help advertise the book sale, a beautifully designed banner, by AlphaGraphics of Pearl, will be displayed in front of the library. 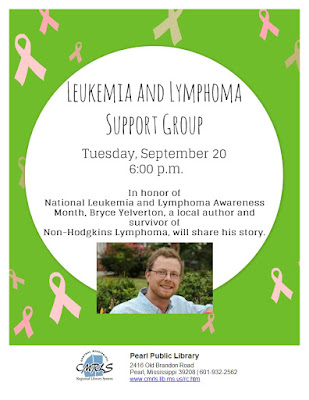 Bryce Yelverton, of Clinton, was diagnosed in December 2013 with Hodgkin Lymphoma Stage 2B, a blood cancer.  During a free, National Blood Cancer Awareness Month program at the Pearl Public Library, Tuesday, Sept. 20 at 6 p.m.,,Yelverton will share his story and talk about the Leukemia and Lymphoma Society.
“I love being able to talk about my story,” said Yelverton, a government relations consultant with Yelverton Consulting in Jackson.  “Most people think that cancer just means death, but the more you tell your story of your trials, the less formidable it is. It’s a way to humanize things.”
After a series of chemo and radiation treatments, Bryce was declared in remission in May 2014.  Armed with Christian strength and the support of family and friends, Yelverton had the help he needed to fight the disease. He learned that the best way to combat cancer is not to let it be the overwhelming giant that silence and private suffering can make it. Cancer doesn’t have to mean the end.

WOW! You don't want to miss either one of these events! As always, all programs are free to the public!

We'll see you there!
Posted by Pearl Library at 2:21 PM No comments: