The definition of folk tale is “a story originating in popular culture, typically passed on by word of mouth.” Part of the history of libraries in Pelahatchie could be defined as a folk tale, because this writer was unable to find much irrefutable evidence but quite a bit of “this is what I remember” from local town residents.

What is known for sure is the library has been a part of the Central Mississippi Regional Library System since its inception in 1986. At that time, the library was located in town in a small building off Highway 80. On January 14, 1991, a groundbreaking ceremony was held for a new 1,600-square-foot building to be located on Highway 80 (where the Masonic Lodge is today). This project was a joint venture of the Rankin County Board of Supervisors and the Town of Pelahatchie. The library remained in this location until moved to its current location in 2009. In 2009, the town added on to an existing community center to establish a new library facility in Muscadine Park. The new library was larger and included a meeting room allowing for larger program attendance. It opened on February 13, 2009, the same date the town museum opened and the Mississippi Blues Marker tribute for Rubin Lacy was revealed. Recently, the Town of Pelahatchie updated the library facilities by installing new signage and replacing the carpet in the main area with laminate flooring. 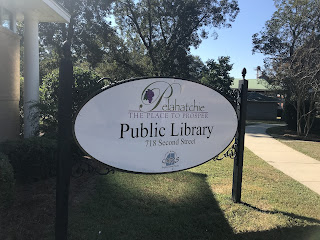 Prior to 1986 is the start of our folklore. Patrons tell me in the 1940s books could be borrowed in the rear of a local merchant’s store. Memories include a bookmobile that stopped in town on a regular basis. At some point, a small library might have been established on Rankin County school property, but there was an issue with flooding so it was moved into town. The town has had a number of librarians through the years. One gentleman mentions Marjorie Murray, who he remembers from when he was a child in the early 1950s. He tells me she was the town librarian and her husband worked at the railroad depot. They both walked to work each morning.   Altus Rhodes was the librarian at the time of the 1991 groundbreaking, and Janice Gailey was the librarian when the current facility was under construction. 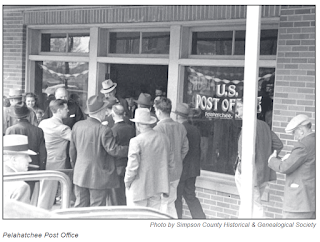 Several months ago, a picture appeared on social media that showed the front of the post office here in Pelahatchie from around 1940. In the photograph, Pelahatchie was spelled Pelahatchee. It sure started some conversations around town about when and why the spelling of the town’s name changed. When you have a reference question, where do you go? To the library, of course. After researching old newspapers, interviewing senior citizens in the area, and searching resources online, we never did discover exactly why the town name's spelling was changed. We did find that from 1859 through 1890, the post office was Pelahatchee Depot; from 1890 through 1950, it was Pelahatchee; and on December 1, 1950, the spelling was changed to Pelahatchie.

From the history of the local library to the spelling of the town’s name, two somewhat inconsequential events in the grand scheme of things, it has become apparent to me how important it is for us to document our history. You just never know when someone will want to discover more. Let’s leave it for them to find.

Email ThisBlogThis!Share to TwitterShare to FacebookShare to Pinterest
Labels: #CMRLSpelahatchie