Not Your Typical Taco Tuesday!

For people who love Mexican food, Taco Tuesday is their favorite night of the week! But this week, Taco Tuesday at the Forest Public Library celebrates the authentic foods and festivities of the Hispanic and Latino American culture and the heritage those traditional foods represent. The Hispanic Heritage night is scheduled for Tuesday, October 2, beginning at 6:00 p.m. 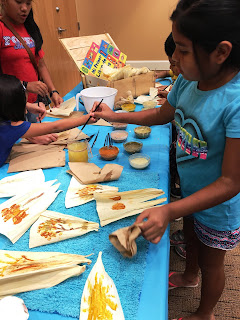 "We have an ever-growing Hispanic and Latino American patronage at the Forest Public Library. During Hispanic Heritage Month, which is celebrated nationwide from September 15 to October 15, we schedule a celebration night to honor this important demographic of our community. Last year, the ladies of the Hispanic community served homemade empanadas, tamales, and taquitos. This year's food focus is the tasty taco with all its many varieties," states librarian Dianne McLaurin. 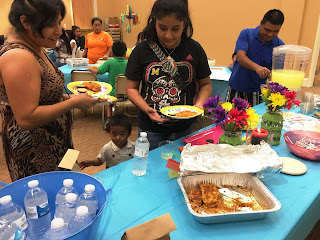 According to the food blog Fix.com, tacos date back to the days when Montezuma and the Aztecs ruled Mexico. A fascinating reference fact found in the article entitled A Guide to Authentic Mexican Food is how the original taco served as a makeshift lunch box for the farmers in the field. Wives would wrap the food in the tortillas to take to the field pickers for their midday meals. Thus, the humble taco was born!

Mexconnect.com states that the urbanization of Mexico and the movement of large groups of country people to the cities led to the popularity of those first tacos. The term taco comes from a Spanish word meaning "light snack" and soon, these snacks evolved into the street tacos that we enjoy today. The practicality of the taco in its easy-to-carry, easy-to-eat form led to taco stands springing up in Mexico City offering taco specialties from all parts of the country.

Never think of Taco Tuesday the same again! Regional differences, methods of preparations, and garnishes elevate the status of the common taco into the unique taco. Most tacos are made with soft tortillas while others are fried until crispy. The fillings can range from refried beans for the most authentic tacos to a host of bite-size meats, ranging from turf to surf. Once again referencing the mexconnect.com article, "the taco vendors or taqueros use a huge block of wood - a tronco - resembling a tree trunk, and an impressively sharp cleaver with which to hack the meat swiftly and skillfully into the bite-size pieces...in the blink of an eye."

Taco garnishes range from fresh ingredients to salsas to dried chiles. Lime wedges, radishes, cucumbers, cilantro, tomatillos, and white onions are used as toppings for traditional tacos. However, what is not found on an authentic taco is cheese...not even Mexican cheese! And tacos certainly don't come in a store-bought package!

The term "Hispanic" refers to a person of Cuban, Mexican, Puerto Rican, South or Central American, and other Spanish culture or origin regardless of race, as defined by the U.S. Census Bureau. According to the latest census, more than 50.5 million people identified themselves as Hispanic or Latino. This year's Hispanic Heritage Month theme is Hispanics: One Endless Voice to Enhance Our Traditions. Join us Tuesday night as the library salutes the Hispanic tradition of the terrific taco!

And a little something extra for the kids...a taco pinata! 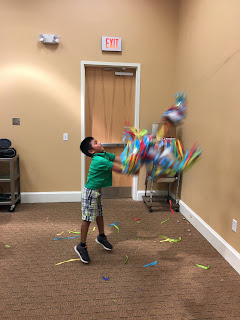