The Adventures of Houdini, the Escape Dog

On Tuesday, June 4, 2019, at approximately 1000 hours, I received a phone call notifying me that a dog was outside the library and that she was missing an owner. "Uh, oh," I thought as I stood up from my desk and walked outside. This sort of problem was not covered in library school.

I could see that the dog, we'll call her Houdini, was a black Labrador Retriever covered in water and mud. She had on a purple collar with no identification. Did she have a microchip? She was friendly which indicated to me that she was probably someone's pet and that someone might want her back.

How do I approach finding the owner? I had to think. Standard Operating Procedure would require me to call Animal Control. I did not want to do this. 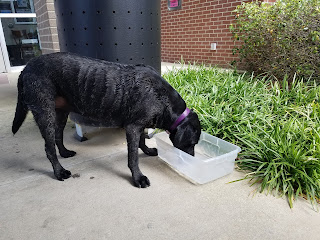 Fortunately, my staff had some experience in this area. We got Houdini some water, took a couple of pictures of her and posted her on the Facebook Rankin County, Mississippi Lost and Found Pets Only page.

And, then, we waited. I can only imagine how the owner must have felt to be going about her daily routine far from home, and then to check the internet and find that her dog, Houdini, had escaped from home, had been running through the neighborhood, and had been spotted at the Flowood Library. The owner arrived at the library a few hours later after the initial posting, but Houdini was gone.

Many years ago if a pet had gone missing, one could post flyers on telephone poles and hope someone had seen their pet. How things have changed. Now we have social media. But, social media would not be enough to solve this problem. Other methods would have to be considered to return Houdini to her owner.

I remembered that Houdini had last been seen sitting outside with a patron at the library. I also remembered that this patron had been the one to call me earlier in the day to let me know that Houdini was outside in the first place. I still had her number on my telephone, on my Caller I.D. in my office.

I made the call and left a message. She called me back.

Houdini had indeed followed her home. I also had a report through social media that Houdini had been spotted near the Pump It Up gas station off of Old Fannin Road.

I gave her the name and number of the owner of the dog. I also got her contact information.

Within the hour Houdini was located by the patron, she called the owner, and the owner retrieved her dog.

Social media and a little detective work, 12 comments and 82 shares on Facebook. This problem was solved in seven hours. For the owner it was probably a very long seven hours. I would like to extend a thank you for everyone who participated in returning Houdini to her owner.

As for Houdini, I'm sure she has a story to tell all her friends, about her adventures at the Flowood Library and her travels through the local neighborhoods.

I'm also sure she is planning her next escape.
Posted by Flowood Library at 11:51 AM