HEAR YE! HEAR YE! Lords and Ladies! Come Partake in the Revelry of a Middle Ages Celebration in November at the Pearl Public Library!

The Society for Creative Anachronism (SCA) featuring the local chapter of the Kingdom of Gleann Abhann's local group, the Shire of IronOx, will be back again to entertain in a big way! 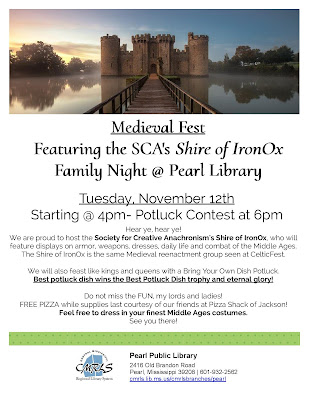 The Shire of IronOx will have displays on armor, weapons, costumes, daily life and have live hand-to-hand combat exhibitions of the Middle Ages.

The Shire of IronOx is the same Medieval reenactment group seen at CelticFest in Jackson.

Attendees are encouraged to bring a dish and enter the potluck contest for a feast fit for kings and queens. The contest will be held at 6 p.m. and the favorite dish wins the Best Potluck Dish trophy.

“We are really excited to have the Shire of IronOx back at the Pearl Library,” Said Kristen Hillman, Youth Services Supervisor in charge of Family Night programming. “Everyone had a blast last year and we hope to have an even better turnout this year.”

In addition to potluck offerings, Pizza Shack of Jackson, a big Pearl Library and Family Night supporter is generously donating pizza that will be available while the supply lasts.

Also feel free to dress in your finest Middle Ages costume. Bring the whole family and all your friends!

The Pearl Public Library holds a themed Family Night program every second Tuesday of the month. And, it's ALWAYS FREE!

We'll see you there!
Posted by Pearl Library at 4:51 PM