Getting Ready for Quarantine 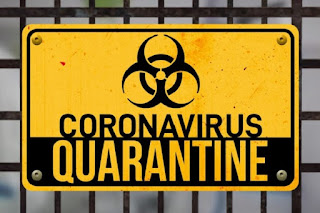 The Coronavirus has been impacting the world since December 2019 with cases climbing on every continent except Antarctica. Some government officials downplay the seriousness of this pandemic by telling us not to panic or that it is not as dangerous as the regular flu which kills thousands of people every year.

Whenever I hear something like this I'm reminded of a direct quote from John Cusack in the movie 2012 released by Columbia Pictures, "When they tell you not to panic, that's when you run!"

There are several movies and television shows about pandemics that one can refer to that do not include mutant zombies: Contagion (2011), Outbreak (1995), Survivors (1975-1977), Survivors remake (2008-2010), Jeremiah (2002-2004) and others. If you really want to crank this up a notch to something more realistic, then the docudrama, After Armageddon (2010) (available online) will put everything into perspective.

If it comes down to quarantine, preferably at home, do you have water, food and reading material? Have you refilled your medical prescriptions? This will be a good time to catch up on your reading. Maybe I will have time to work on my taxes.

There are books on survival that you can read such as, How to Survive the End of the World as We Know It: Tactics, Techniques, and Technologies for Uncertain Times or Tools for Survival: What You Need to Survive When You're on Your Own by James Wesley Rawles. He also has a blog online available to the public called SurvivalBlog.com

The LDS Preparedness Manual by the The Church of Jesus Christ of Latter-day Saints is a comprehensive study guide on food storage and disaster preparedness. It is available online.

Remember grocery stores maintain an inventory for three days thanks to our Just In Time (JIT) inventory system. After a crisis event it will take about three days for things to begin to get ugly. It has been said that society is only 72 hours away from anarchy.

When this pandemic comes to an end, we will hopefully be better prepared for the next crisis that comes our way.
Posted by Flowood Library at 8:24 AM